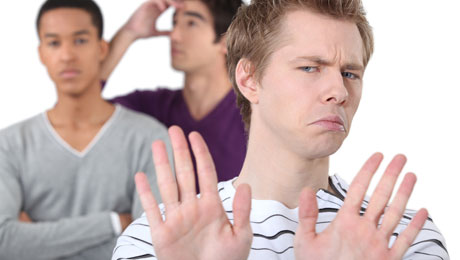 It’s not an exaggeration to say that criticism is for some people the dominant fear of everyday life. Unfortunately, there will always be a person to criticize your behaviour or negatively characterize your actions. Nobody likes criticism and a few have the skills to make it work for their benefit.

Definitely a bad criticism can hurt sometimes, but the following 7 tips can help you deal with it and turn it into an opportunity.

Separate the tone of criticism from honest suggestions

Many people, even unconsciously, manage to improve themselves after a harsh criticism, while others ‘get stuck’ on the attitude and tone of it. An argument can be intense, but that doesn’t mean you have to turn your thinking off.

Put aside in your mind the fake flattery, the temper but also the honesty of the person talking to you after a fight and view your weaknesses with a sincere point of view! Besides, without criticism how could you ever make any progress whatsoever in your life?

Even a fake smile can help you relax more after a rough criticism. Smiling generates a positive contraction to your body and can soothe the temper you are experiencing at the moment. In other words, it will definitely give you a mood boost, while at the same time it will trouble the person you are talking with!

If you comment on your mother’s cooking, then most likely she will take your criticism personally. However, it is wrong to identify ourselves with an apple pie! When people criticize directly, then they don’t characterize the real you but a specific aspect of you. This criticism may originate from jealousy or fake pride. These elements, however, constitute simple feelings that don’t reveal a true character…they just come and go!

Try not to respond immediately

If you respond immediately after a harsh criticism, you are more likely to respond with anger and rage towards the other party. Later, you will definitely regret your words, since you may have lost your temper.

If you wait patiently and take some deep breaths, then your mind will clear and the answers will be more balanced based on your true nature.

Do not pay attention to unjustified criticism

Sometimes, people criticise others without reason and cause. Many do not even justify their opinion. In this case, it is advisable to remain indifferent and ignore the situation completely. If you give more value to unjustified criticism than it really deserves, then you may lose your dignity instead of winning the respect of others.

Accept the fact that criticism will always be there

Criticism is a form of expression and it should be understood that it is part of our life. You cannot get away from it, but you can certainly minimize your interactions with negative people! Instead you can focus on new ideas for discussion while keeping your self-esteem high.

What are the benefits of bad criticism?

Negative comments will help you find (and admit) your faults or imperfections and try to improve them.  This increases your chances for moments of happiness, pleasure, peace and success.

Criticism helps you explore unresolved questions about yourself. Do not forget that when someone criticizes you, in essence it throws ‘light’ on your own insecurities.

It opens new perspectives and ideas that you may have not considered.

You can enhance your problem solving skills especially when bad criticism is about a problem you need to solve.

The harsh criticism teaches us not to worry about small issues that are not so important.

Gives you an opportunity to understand yourself better; Think how much time you spend analysing your thoughts and feelings after a bad criticism.